Jeremiah 1:1-3, 25:3, 36:2 – The historical placement of Jeremiah’s early ministry is herein identified. This information is vital to determine the audience of Jeremiah’s earlier prophecies, those of the greater part of his ministry, and all unmarked and undated messages received and delivered.

Jeremiah 3:6-25 – Anytime from the 13th year of Josiah’s reign and onward, this is the second and final prophecy given during Josiah’s reign. Surprisingly, this message is for the people of Israel instead of the people of Judah. The reason for this is clarified by the exploits of Josiah and the peculiar circumstance of Israel during that time.

The Forerunning Context of the Great Falling Away & the Tribulation

Approx. 641-611 BC, Josiah’s Reign to Jehoahaz and Jehoiakim’s Reign 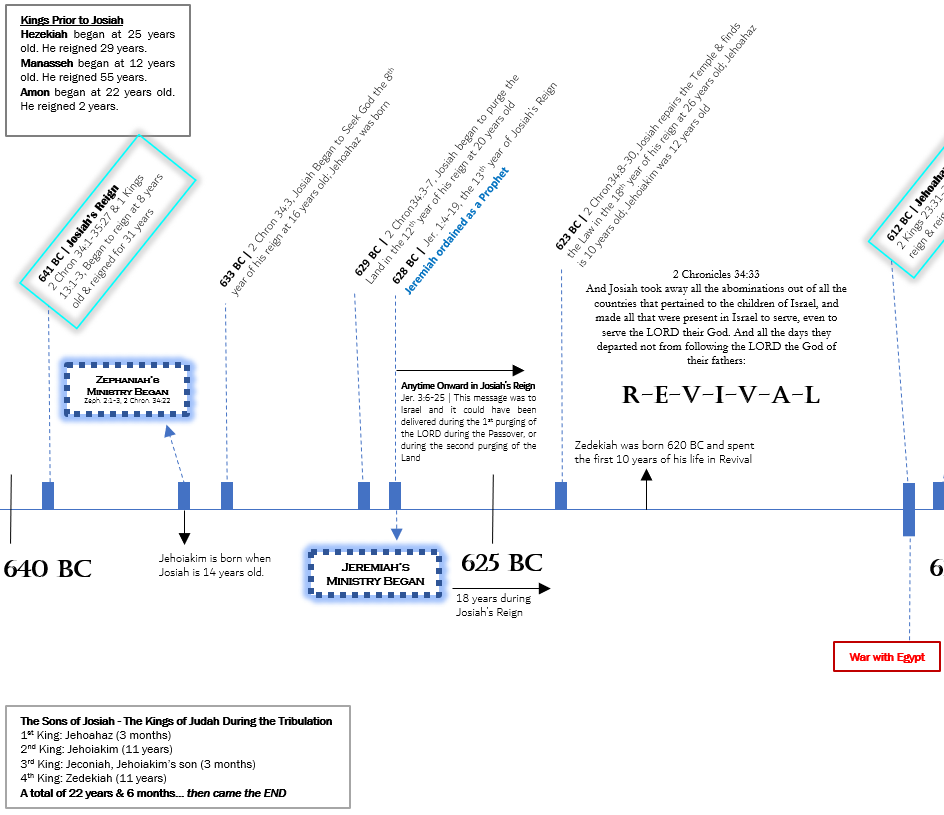 As you can see in the portion of the Timeline provided above, the 13-year Revival Period under King Josiah – (approx. 623-611 BC) from the 18th year of Josiah’s reign to his death which resulted in the ascension of Johoahaz (3 months) and Jehoiakim (11 years) – was a period where “ALL” were made to “serve the LORD” (2 Chron. 34:33)! From 10 years old to 23 years old, Jehoahaz served the LORD! From 12 years old to 25 years old, Jehoiakim served the LORD! These two men, the sons of Josiah, spent the formative years of their understanding in the rain shower of REVIVAL! From a place of utter and longstanding saturation in the Spirit of God on every side, these men ascended the Throne! And, shockingly, during the next 22 years all hell broke loose! These men, the apostates of the Great Tribulation, were men who knew the LORD and walked with God, having spent over a decade in obedience to God, and yet in their day all the spiritual and physical curses were brought into manifestation! No one is above it. No, not in their generation or ours! This is a sobering reality to reckon at such an hour as now! Oh, how ignorantly optimistic I have been! May the LORD have mercy.

After spending 13 years watching Jeremiah as a right-hand man to King Josiah, these men rebelled against the LORD and disregarded the renown and aged Prophet! Jeremiah, the beloved friend of Josiah, would have gone to and fro from Josiah’s children (Jehoahaz, Jehoiakim, and Zedekiah) while interacting with him and his family, his children at their differing ages from 1 to 25 years old. This is a profound heritage to denounce and disregard! This is an immense fall from a high and glorious place! Zedekiah, for a later reference point, was born 3 years into the Revival Period. He spent the first 10 years of his life knowing nothing but a King, a Kingdom, and a people of Judah loving and serving the LORD in Spirit and in truth! He too, like the others, served the LORD.

After just 3 months, Jehoahaz is taken captive to Egypt and Judah is put under tribute. Then Eliakim, the son of Josiah (who was named Jehoiakim by Pharoah), is put in rule by Pharoah. He reigned for a total of 11 years (2 Kings 23:34, 2 Chron. 36:4).

Previous: A Chronological Ordering of Events
Next: Jehoiakim’s Reign