The historical placement of Jeremiah’s early ministry: Jeremiah became a Prophet and began to prophesy in the 13th year of the reign of Josiah, which was 5 years after Josiah “began to seek after the God of David his father” (2 Chron. 34:3). This first 4 years of seeking the LORD and 1 year of purging the Land, which transpired before Jeremiah became a Prophet, is relevant to the Tribulation Period. My reader, Josiah was not alone. 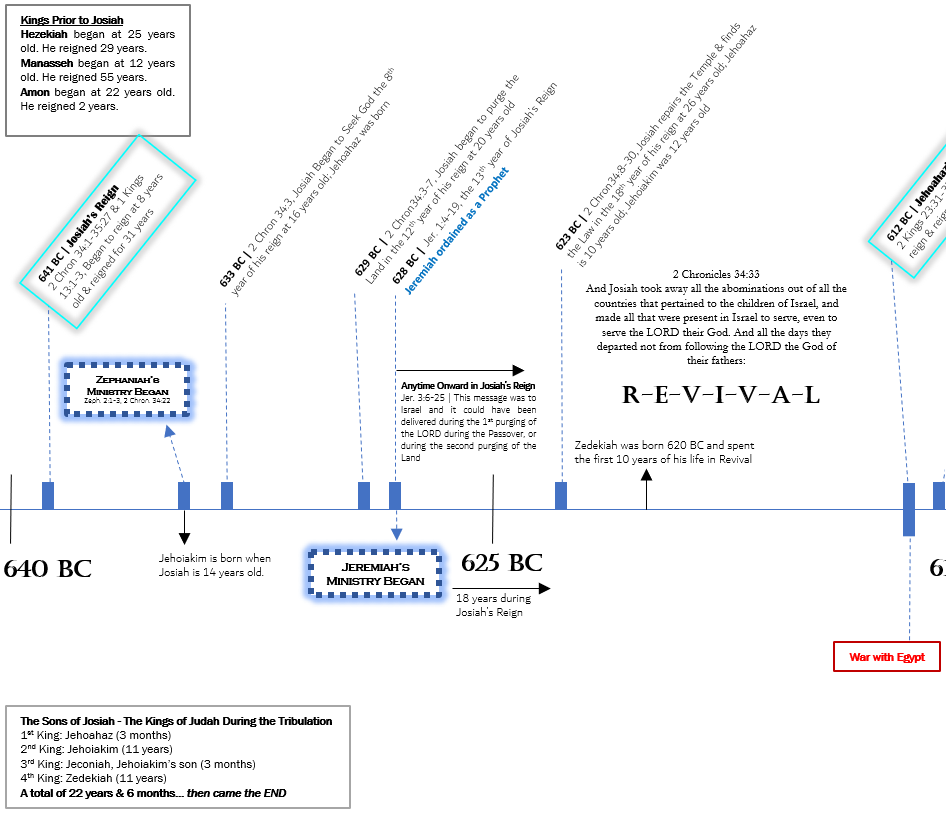 The timeline above calendars the major points of Josiah’s life. The beginning of his reign (641 BC), when he began to seek God (633 BC), when he began to purge the Lands of Israel and Judah (629 BC), when he began to restore the Temple which led to the discovery of the Law (623 BC), and the 13 Year REVIVAL period that followed. After studiously considering the life of Josiah, one is made to wonder… what made Josiah begin to seek God at 16 years of age during the 8th year of his reign? I am persuaded that Josiah began to seek the LORD upon Zephaniah prophesying the word of the LORD to the people. In the timeline above, the beginning of Zephaniah’s ministry is placed just before Josiah began to seek the LORD in approx. 633 BC. Can you imagine how Josiah and company felt when they heard the word of the LORD, declaring:

“The great Day of the LORD is near, it is near, and hasteth greatly, even the voice of the Day of the LORD: the mighty man shall cry there bitterly. That day is a day of wrath, a day of trouble and distress, a day of wasteness and desolation, a day of darkness and gloominess, a day of clouds and thick darkness, A day of the trumpet and alarm against the fenced cities, and against the high towers. And I will bring distress upon men, that they shall walk like blind men, because they have sinned against the LORD: and their blood shall be poured out as dust, and their flesh as the dung. Neither their silver nor their gold shall be able to deliver them in the day of the LORD'S wrath; but the whole land shall be devoured by the fire of his jealousy: for he shall make even a speedy riddance of all them that dwell in the land.” – Zeph. 1:14-18

Very specifically, the LORD threatened the King and the Princes, saying, “I will punish the Princes and the King’s children” (Zeph. 1:8). My reader, think of it! The very first thing the LORD said through the Prophet Zephaniah was, “I will utterly consume all things from off the Land” (Zeph. 1:2)! The first sentence declared the total destruction of the Kingdom of Judah, a near annihilation of the people of Judah, and a total dispersion of the remnant of survivors. Now, remember, Josiah was only 16 years old when he began to seek the LORD. No doubt, Josiah would have heard the life stories of his Grandfather and great Grandfather, Manasseh and Hezekiah, and how the Kingdom of Israel was overthrown by the Assyrians because of their wickedness and sin. This is a godly heritage! But, being so young, I cannot believe that these things along moved the man to seek God at the young age of 16 years. Furthermore, by the age of 26, a College of seeking the LORD was already built and in full operation (2 Chron. 34:22). Also, it is not likely that Jeremiah, who became a Prophet only 5 years after Josiah first began seeking the LORD, was Josiah’s only companion – they were both very young! A very significant movement was underway insomuch that a College was built and an unprecedented campaign of purging of idolatry commenced in both Israel and Judah; therefore, it is to be expected that some profound event motivated all this! I believe this significant and profoundly inspiring event is Zephaniah’s prophesying, therefore I place the beginning of his ministry right before Josiah began to seek the LORD in the 8th year of his reign. Consider Zephaniah’s words, my reader.

Zephaniah cried, “gather yourselves together”, and, “seek ye the LORD”, and in turn the people gathered together to intentionally seek the LORD. This was a 4-year long intentional effort which led into the campaign of idolatry purging. That means, King Josiah, the Prophet Zephaniah, Huldah the Prophetess, Jeremiah the Priest in training (who was both young and likely seeking the Lord alongside Jeremiah before he was called to be a Prophet), Hilkiah the High Priest (who could have been Jeremiah’s father), Shaphan the Scribe, and all others who pertained to the intentional pursuit of the Lord in that time (“all ye meek of the earth”), were in a consorted effort to establish a revival. Again, let me affirm this again: we can see clear evidences of this intentional gathering together in pursuit of the Lord in that a College was established, the same place where Huldah the Prophetess was found to be when Josiah needed a word from the Lord (2 Chron. 34:22). You see, Josiah knew where find a Prophet or Prophetess and receive a word from the LORD, the College! Huldah, no doubt, was with many others who pertained to the College, and she was the Prophetess who delivered the word of the Lord to Josiah because Zephaniah was abroad somewhere outside of the City of Jerusalem. It is reasonable to conclude that Zephaniah was abroad because if he would have been in Jerusalem, he would have delivered the word of the Lord to Josiah instead of Huldah. This is because, firstly, he was a man (Gen. 3:16, Judges 4:9, 1 Cor. 11:3-10) and, secondarily, he was a more prominent Prophet than Huldah (Zeph. 1:1-3:20).

Note: Jeremiah was a Priest and the son of a Priest, before he was a Prophet, which means that he would have been in the formative years of his learning as well, according as it was written, the “Priest’s lips should keep knowledge”, but both he and Josiah lacked the Law to read and learn from in those years (Mal. 2:7). Because of this, the leadership of this time must have sought understanding through the Oral Tradition which remained among the ancients. With this heart, Jeremiah, Josiah, and many others would have spoken often one to another concerning the fear of the LORD and the fragments of understanding which were preserved through Oral Tradition (Mal. 3:16). In the life of Josiah, remember, four years passed in seeking and learning before any purging of the Land transpired.

Giving further significance to the beginning of Jeremiah’s ministry, in that it began in the 13th year of Josiah’s reign, this was only 1 year after Josiah began to purge the Land of idolatry. Josiah went on to purge the Lands of Judah, Jerusalem, and Israel, as much as he knew how, and this he did steadfastly for 5 additional years from the beginning of Jeremiah’s ministry until his return to Jerusalem to repair the Temple in the 18th year of his reign. In total, as it pertained to Josiah, there were 4 years of seeking after the Lord and 6 years of purging the Lands of idolatry, and Jeremiah was likely seeking the LORD with Josiah from the very beginning. The spiritual condition of this generation shifted from condemnation to justification at the 18th year of Josiah’s reign. Do you remember how slim the chance was for mercy? Zephaniah said, “it may be ye shall be hid in the Day of the LORD’s anger” (Zeph. 2:3)! What happened?

At last in the 18th year, the Book of the Law was found hidden in the Temple. Until this point in time, when, finally, the Law was found and then read before the King (resulting in his tender-hearted penitence and clothe-rending tearfulness), the wrath of God was still impending upon Josiah’s generation despite all that they had done (2 Chron. 34:27-28). This event proved to be the moment at which God’s mind to destroy the generation was changed, and not before! After this, and for the rest of Josiah’s reign, the King “made a Covenant before the LORD” and “caused all that were present in Jerusalem and Benjamin to stand to it”, “and all the inhabitants of Jerusalem did according to the Covenant of God” (2 Chron. 34:31-32). Notably, it was said of Josiah again, “Josiah took away all the abominations out of all the countries that pertained to the children of Israel, and made all that were present in Israel to serve, even to serve the LORD their God. And all his days they departed not from following the LORD, the God of their fathers” (2 Chron. 34:33). What a profound testimony! The ministry of this man, Josiah, must not be underestimated! For, “like unto him was there no King before him, that turned to the LORD with all his heart, and with all his soul, and with all his might, according to all the Law of Moses; neither after him arose there any like him” (2 Kings 23:25).

In retrospect, the manifold wisdom of God is manifest in the life of Josiah in one of the most peculiar pronouncements of prophecy contained in all of scripture. My reader, not many men are called by name hundreds of years before their birth, but Josiah was! At the nativity of idolatry in the Land of Israel, Josiah’s name was uttered by the mouth of a holy Prophet, declaring, “a child shall be born unto the House of David, Josiah by name” (1 Kings 13:2), which meant the profanation and desolation of the altars of idolatry in the Name of the God of Israel! What a Glory!

Previous: A Commentary on the Book of Jeremiah
Next: Jeremiah 1:4-19